Natural fibers are characterized by breathing naturally, a quality that generates them to serve as thermal insulators:
Fresh in summer, warm in winter.
Being elastic fibers are more resistant to wrinkles and more durable. 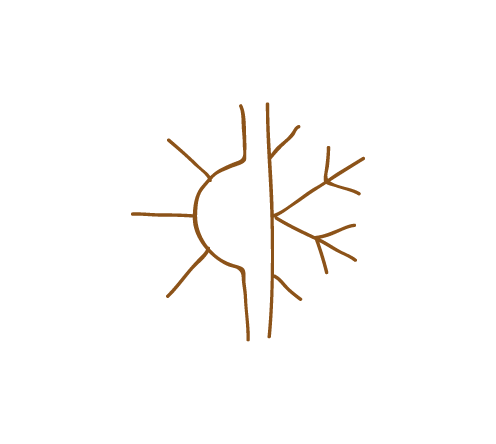 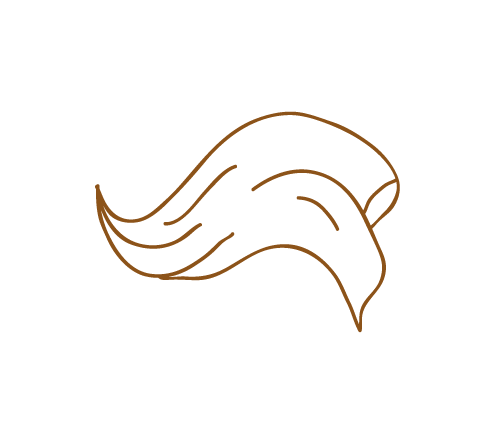 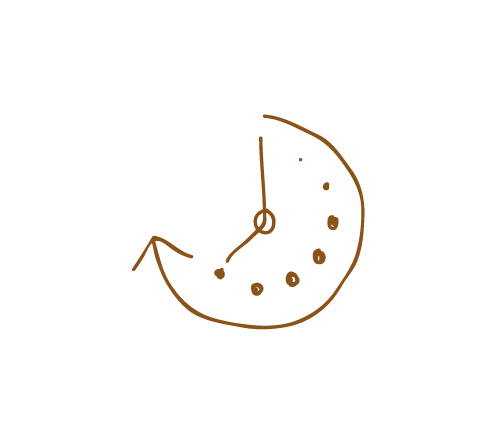 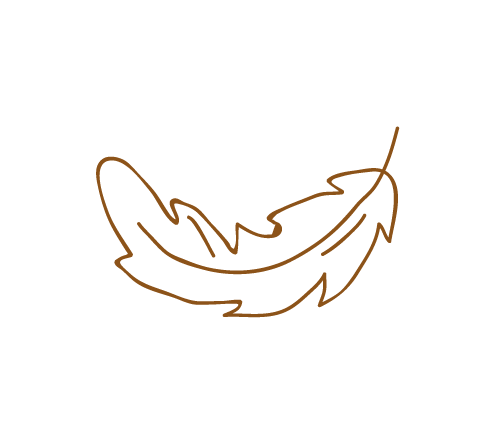 Lightweight and insulating fibers that help regulate body temperature. Safe and elegant: these fibers are naturally fireproof. They are presented in natural tones, typical of the animal.

In Argentina we have three indigenous groups of South American camelids: Vicuña, Guanaco and Llama.
Each group has unique and special characteristics, which translate into particular benefits in each case. These animals inhabit very high ground with extreme climates: adaptation to the environment in which they live gives the fiber insulating and thermal qualities. For their docility they can be mixed with other types of fibers such as sheep's wool, silk or cotton, obtaining mixtures that enhance their properties.

The smallest of the camelids, weighs between 40 and 50 kg and has a length of 80 cm. They're wild. Its color is beige or vicuña (light reddish brown) on the back and white on the ventral area and legs. 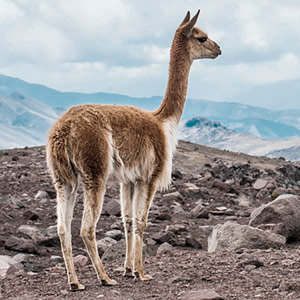 Considered by Los Incas as the gold of the Andes, it is the finest and most expensive fiber in the world. Vicuña is a wild species that inhabits the Andean plateau (more than 3200mts high above sea level). They are located in northwestern Argentina, western Bolivia, northeastern Chile, sectors of the Andes of Ecuador and in the Andean heights of Peru. It is protected today by the environment it inhabits.

The vicuña is the smallest of the camelids, native to the South American region, unfolding in total harmony in its original habitat.

Its fiber is characterized by being naturally light, warm and exceptionally soft to the touch. Its color is beige or light brown reddish on the back, white in the central area and legs, with variations depending on the geographical areas where they live. The fineness of its fiber gives it a great power of coverage in its garments, being able to reach 12 microns. Its yarn is precious, because they can only be obtained from the shear of each animal 200 grams of fiber. 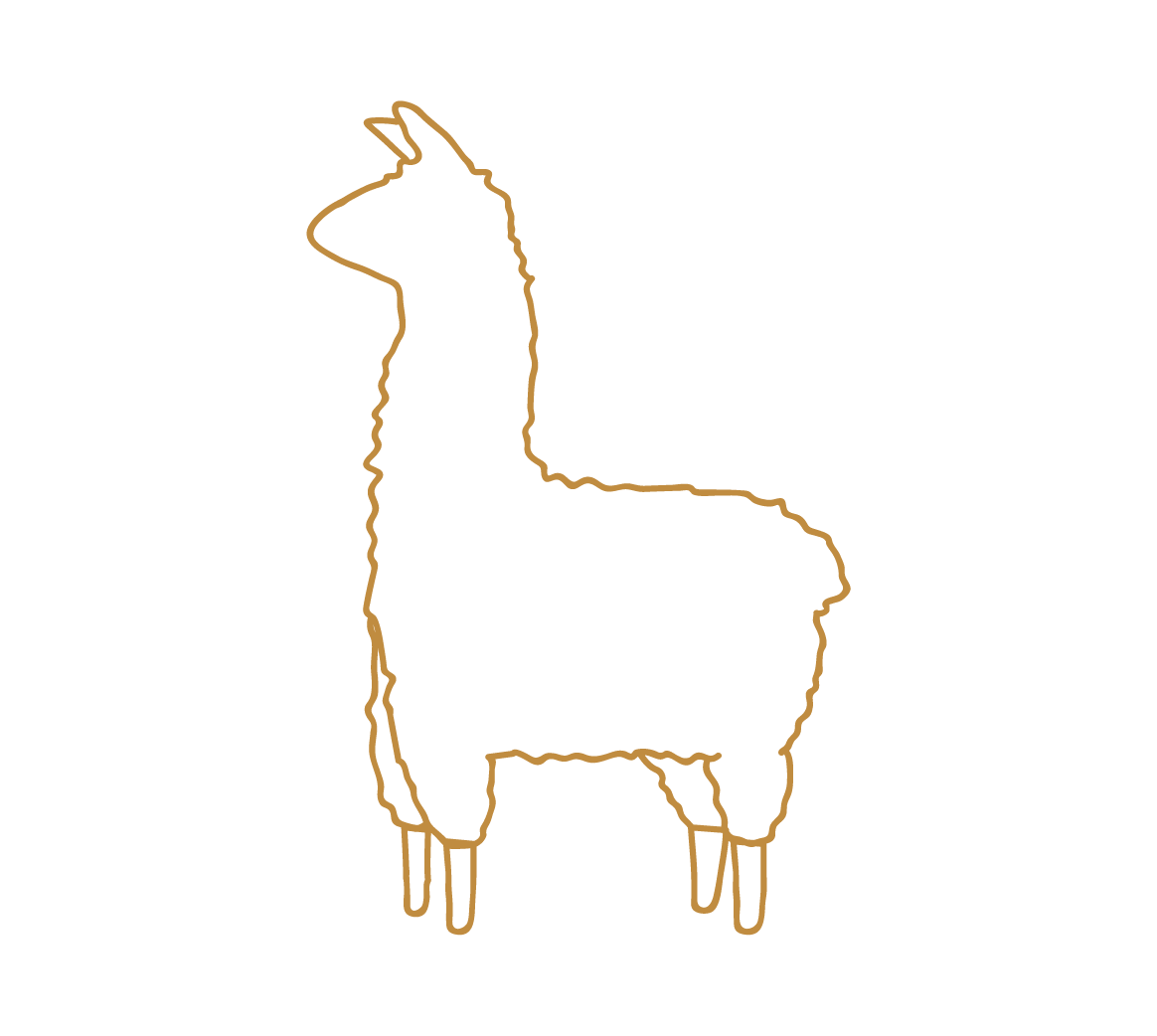 Domestic artiodáctyl mammal of the Camelidae family, abundant in Puna or plateau of the Andes of Argentina, Bolivia, Chile, Ecuador and Peru. 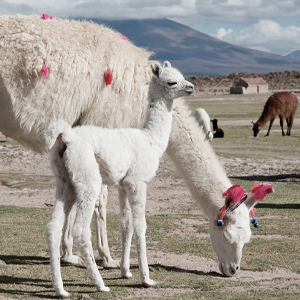 It is a naturally hypoallergenic fiber, very light, silky and able to regulate body temperature. It has greater thermal capacity than sheep's wool. It gives us a wide range of natural colors: black, grey, brown, beige, raw and painted.

The Llama is the heaviest and longest of South American camelids. Coming from los Andes, it is found in greater quantity in Argentina´s Puna and the plateau in Bolivia, but is native to the entire Andean region. The Llama grows and develops in its totally natural environment, away from any contamination. Being an animal native to the South American region, it performs in total harmony in its original habitat.

It was created by native Andean peoples by artificial selection from wild guanacos that were domesticated..

The Llama has historically been the main companion and ally for our peoples originating in Argentina´s Puna. She helped them survive in their climate, extremely arid and hot during the day, and extremely cold at night. The Llama provided them with spinning fibers, and thus constituted their fabrics and handicrafts, so characteristic of their culture. Their furs served as a coat and with their leathers they made shoes, bags and ropes. They fed on their meats, sweet-tasting and rich in protein. Of his fats and bodily fluids they extracted medicines, and even his manure was used as fuel, to ignite his campfires, due to the absence of trees in the region. The Llama also prevented them from the dangers of Punesian wildlife predators, such as foxes and cougars. In addition, the Llama was used as a cargo animal, to transport the products by long expeditions through the Puna. In Argentina we have a special genotype called antofalla or Argentine Llama, which differs from the rest of its neighbors, by having a thinner and softer fiber.

The first classification and selection of our fibers is done by hand. After washing, it undergoes acerid process, which ends up separating the thickest fiber. Leaving the fine fiber lends for spinning. Once the Llama fiber is classified, it has a wide range of finesse (20 to 40 microns), allowing them to be applied in the most varied uses. (from sweaters to carpets). 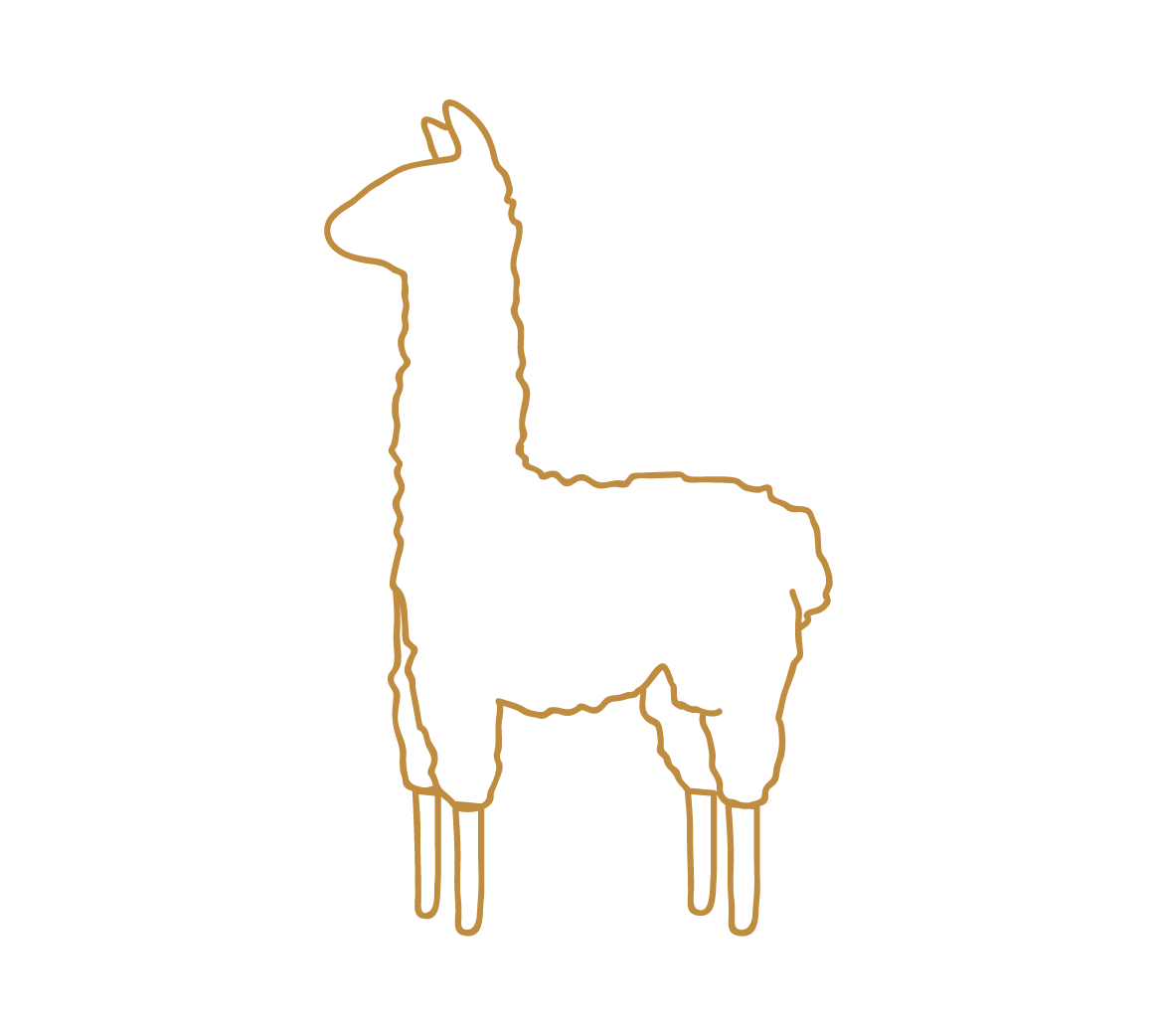 Artiodactyl mammal (which has hooves), typical of South America. It is a wild, elegant animal with fine bones, with a height of approximately 1.60 meters and about 91 kilograms of weight. 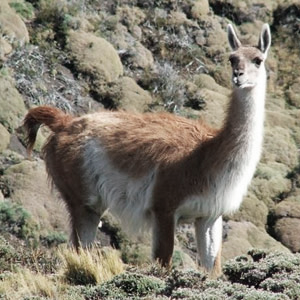 It has a very precious fiber, for its finesse and softness, comparable to cashmere for its softness. Its color can vary from beige to light brown, with reddish tints.

Although it is an animal native to South America, from the arrival of the white man to the continent to today, there were various barbarities that reduced the guanaco to live wildly, predominantly in Patagonia Argentina, where 97% of its population lives.

Its fur is longer than that of the vicuña but shorter than that of the alpaca; it is also of excellent quality. Its fiber is very light, because, unlike sheep's wool and in the likeness of camelids, it is hollow. In chuluengos (young guanacos) the average fineness of fiber is 15 microns. In adult guanacos, the average fineness of the fleece is 17 microns. This generates a yarn of extreme softness, luster and comfort. This fiber is highly precious because only 600 grams are obtained after the shearing of an animal. Its careful classification allows the garments made with this yarn, to go in direct contact with the skin. We prepare the fibers for spinning through a series of previous processes. After shearing, the fleece is classified according to the sector of the animal that comes from; also by tone. These batches account for the origin and fineness of fiber by sector. This data allows us to establish the traceability of each batch.

The first selection of fleece fibers is done manually. Within the natural fibers, the Llama contains bristles, which are thicker and crimped fibers, with characteristics other than the rest. They result in itching sensation in the final product. To avoid this, we work on a more thorough selection, where the bristles are discarded and the most subtle fiber is extracted. A spinning-ready fiber is obtained: 20 microns or less for llama fiber, 15 to 12 microns for guanaco fiber, and 13 to 11 microns (or less) for vicuña fiber.

This process is called dehaired.

We are constantly working on the development of a technology applied to the treatment and preparation of Natural South American fibers that allows us to differentiate our final products. 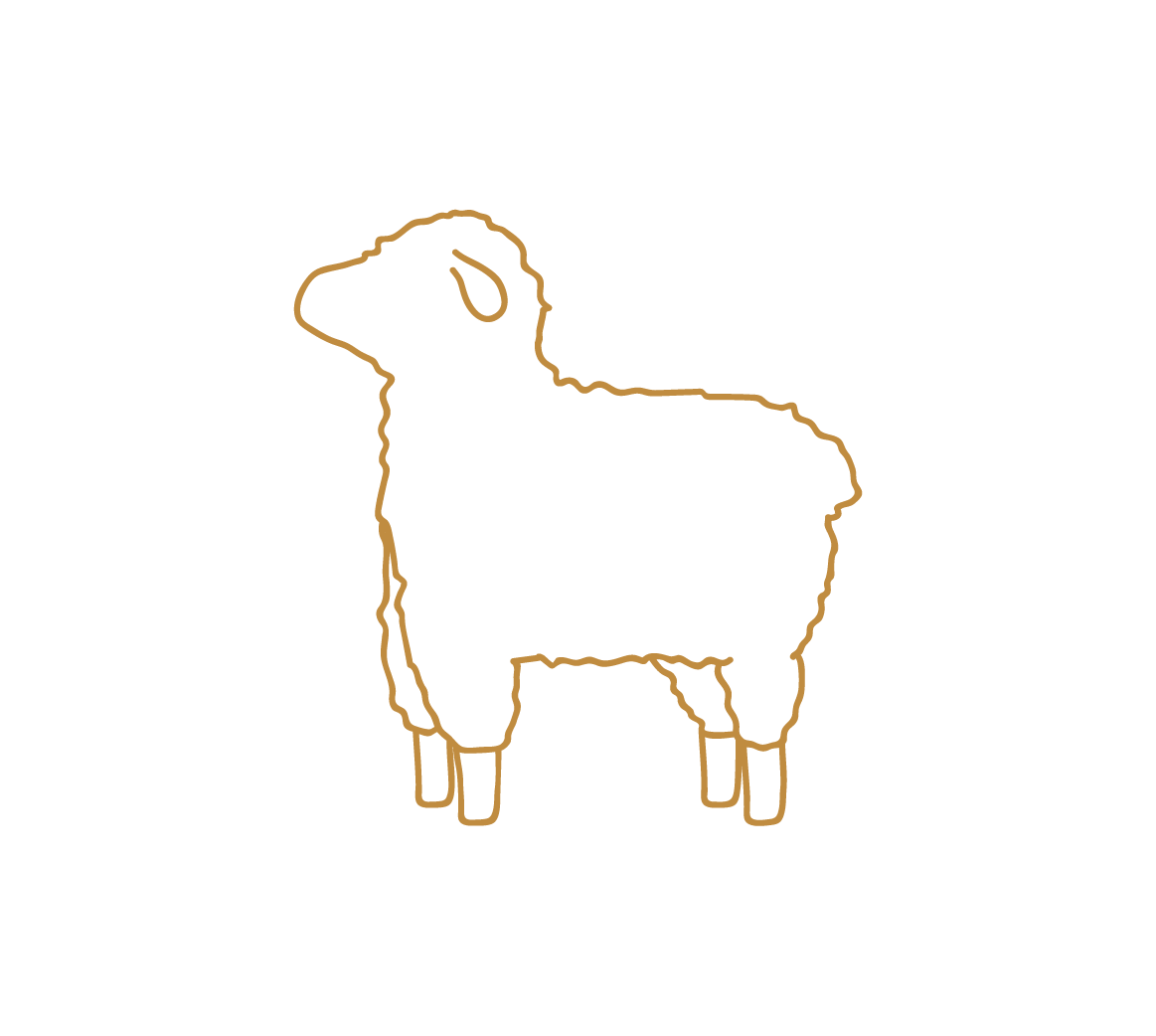 The Creole sheep breed occupies a prominent place in the current Argentine sheep heritage. It is considered the quintessential regional wool. 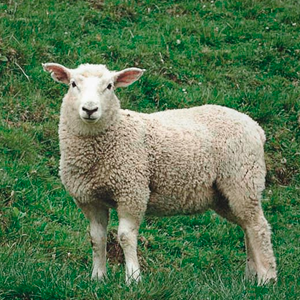 The Creole sheep breed occupies a prominent place in the current Argentine sheep heritage. It is distributed in almost all provinces and ranks third in number of animals, after the Patagonian Merino and Corriedale correntina.

The Andean sheep is considered the quintessential regional wool. It has remained to this day due to the progressive interbreeding with Spanish merino sheep brought from Europe in colonial times, being able to adapt to the different environments of our country. It is mostly found in the NOA. It has demonstrated great productive advantages valued by small and medium-sized local producers in different regions.

There is no classification system developed for wools produced in Jujuy´s Puna. They are classified into various batches, as they do not have genetic homogeneity in the fiber. We can find wonderful batches of 21 microns in some regions. Its colors have the peculiarity of not being pure, since they change by region, all colors appear nuanced with black fibridillas, the tones range from the raw spotted to the brown melange, until reaching an intense black. It is also presented in mixed shades of grey.

We value the authenticity of these wools that were initially rejected by the fashion system. Together with goats and camelids they are the raw material of local northern Argentine handicrafts. 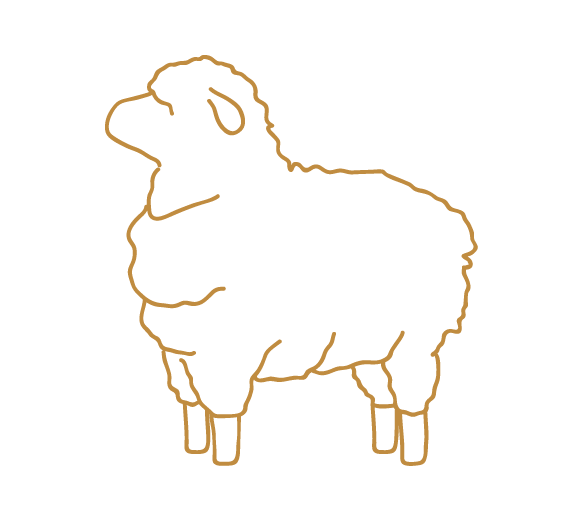 Its origin is unknown, although it is believed to come from Africa and the Iberian Peninsula. It is the most widely disseminated in Argentina. 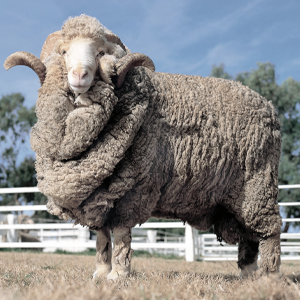 Its origin is unknown, although it is believed to come from Africa and the Iberian Peninsula. It is the most widely disseminated in Argentina with just over six million animals. It is geographically located in Argentine Patagonia.

The early merino is the current local crossing. It is the most chosen sheep for its finesse and wool quality. Its fleece is closed and one diameter that varies between 16 and 24 microns. Its wool production ranges from 3.5 to 5kg per animal. Its fiber has a high thermal capacity, and functions as a temperature regulator. In garments, it is soft on skin contact and does not retain sweat, as it is naturally anti-bacterial and protects from UV rays. 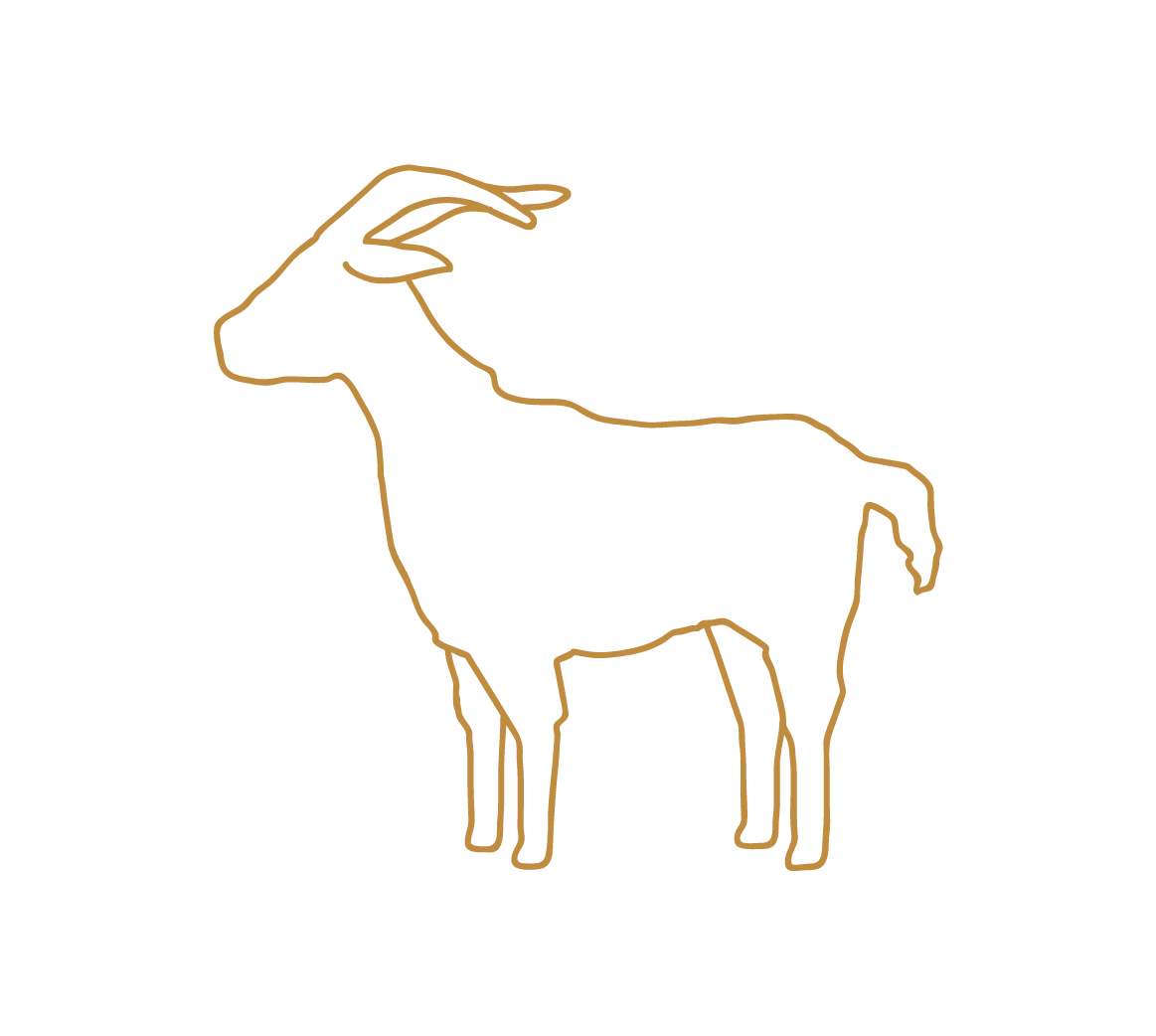 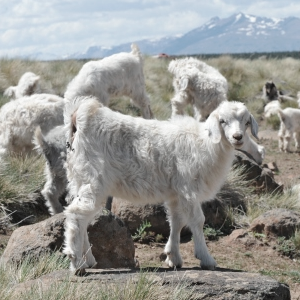 Producers in the area work under a transhumance scheme, which involves taking the goats to the highest area of the steppe during the summer, and lowering them in the winter. This ageing results in the possibility of obtaining a very thin and long strand, similar to that of Cashmere. Then we work this strand through the dehaired process to enhance its finesse and softness (16 to 19 microns). 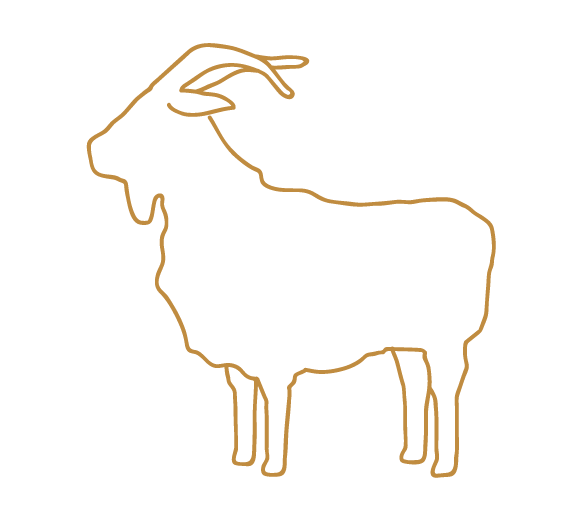 It's usually called diamond fiber. It is one of the most noble silky and resistant natural fibers. 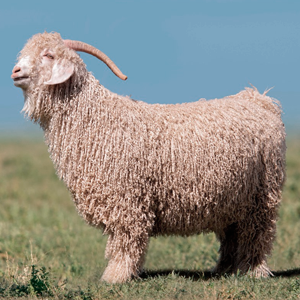 It is one of the most noble, silky and resistant natural fibers. It also has the quality of reflecting color, which generates it to be extremely bright.

Mohair is the fleece of the angora goat, and is one of the most beautiful sustainable natural fibers in the world. It's flammable and responsive. Due to its flexibility, mohair is rated as one of the most durable fibers.

Although South Africa is the world's largest producer of mohair, Argentina has a stable and growing population in Neuquén province. 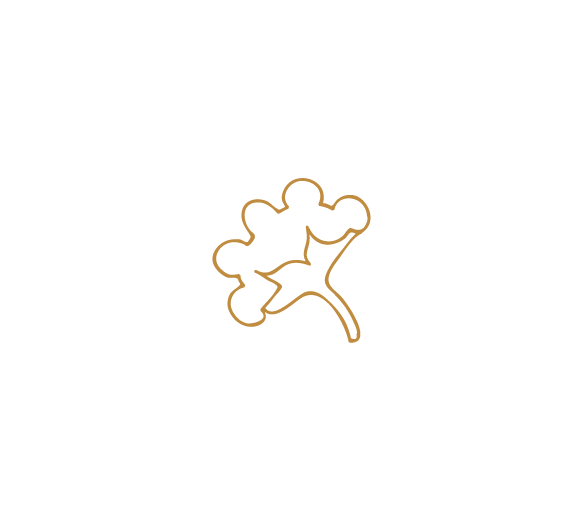 The word cotton means fine fabric, and is the most widely used natural fiber in the world. Argentina has large cotton productions for essential products.

Being a cellulosic fiber is adaptable in its form and versatile, although it is considered a short fiber.

This fiber allows air to flow freely, allowing the skin to breathe and absorb sweat. In turn, it is naturally hypoallergenic and mild. 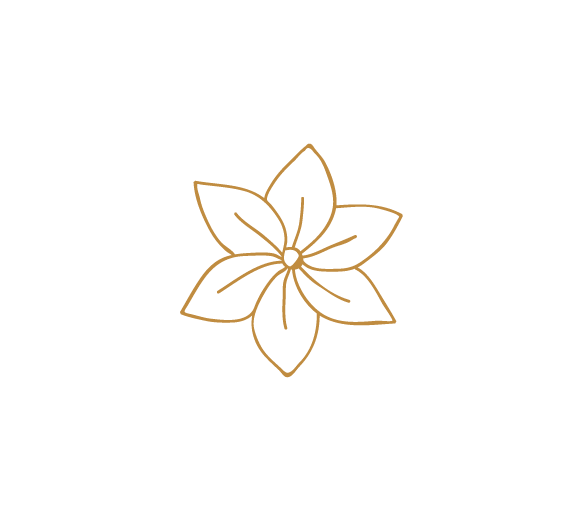 Linen fiber is characterized by being strong and flexible.It results in very strong and shiny garments. They are fresh fibers, because due to their moisture absorption power they are ideal for use in warm and humid climates.

It is often recognized for its ease of wrinkling. Silk is a protein fiber obtained from the silkworm.

It is distinguished by being thin, hypoallergenic and having a soft and smooth texture to the touch. It has a unique drop, high strength and exceptional shine.

In addition, this type of fiber provides a great absorption of moisture.